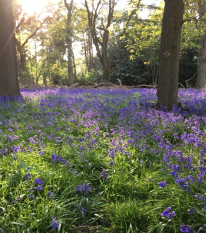 Knowing our Nature: What is happening in the countryside in May

In the March Parish Magazine, we advertised that there would be an open meeting to discuss conservation issues in the Parish. Obviously, we were not able to meet in the pub due to the lockdown measures, but a meeting was held by Zoom.  The aim was to provide an opportunity to engage with members of the community about farming and the countryside, and to discover what was important to people and why. One of the things to come out from all of this was the desire to continue engaging with people, and the need for more sharing of information, and education about our countryside. As a result, we thought it would be interesting to write something each month f, explaining what the farms are up to, and what you might see in the countryside. Initially published in the Parish Magazine, we thought these articles would also provide a useful blog and resource for years to come.  So this is the first of 12, written in April, but looking forward to May.

April has been a month where spring crops have been sown, and cows are calving. Winter sown crops have enjoyed the good weather and are now coming along well and needing fertilising.

In May, we anticipate further calving. The cows of East Hall Farm will be out and grazing the fields around Stagenhoe. We practice mob grazing, which means that we keep the animals in a tight herd and move them on to fresh grass each day. This means that the grass is grazed thoroughly, but then left for between 30 – 60 days to grow tall and set seed, before being grazed again. The cows are circulated through sections of grazing, delineated by moveable electric fencing, and so only return to the same field after all other grassland land has been grazed. So if you see the cows, they will be nearby, but not in the exact same space, the next day.

The Bluebells will be almost coming to an end, but you may still catch some in Reynolds or Hitch Wood. Bluebells do not survive either picking or trampling, so please, enjoy looking at them where they area, but stick to the footpath and leave them where you see them.

Spring and early summer is also a great time for flowers. Hitch Spring has tremendous wildflowers – cowslips, wood anemone and lesser celandine grow well. Other flowers to be seen in May are common spotted orchids, pignut, bulbous and meadow buttercups and Lady’s smock. Along roadsides cow parsley will be coming out, and elder flower will also be coming out. There are some pretty early flowering grasses to see in meadows too in May – crested dogstail, sweet vernal grass and meadow foxtail.

Common Blue butterflies are flying by the end of May and can be seen in hay meadows as their caterpillars feed on birdsfoot trefoil and clover.  Other butterflies to look out for are red admirals, peacock, brimstone, comma, large white and speckled wood which likes the edge of woodland but may come into tree filled gardens.  Holly blues are on the wing now but can also be seen next month.

Most songbirds will be nesting by May and the best time for the dawn chorus if anyone can rise early enough (4.30 to 6.30am) will be the first week of May. The familiar yellowhammer song of ‘little bread and no cheese’ can be heard from hedgerows. Swallows, house martins and swifts will have returned to their regular nesting sites and be repairing their nests with mud from local ponds and wet places.  Other migrants such as spotted flycatchers will have also returned.

In some years, we have had cuckoos in Reynolds Wood and Hounsfield wood. In previous years they have arrived in early May. Last year, I did not hear to many in Reynolds, but I hope they will be back in force this year. It is possible to hear their distinctive call from quite far away. This year, with the reduction in flights from Luton Airport, I hope it will be even easier. In fact, I have noticed much more birdsong this year already.

Towards the end of May tawny owlets may be seen as they nest early in March.

There is also likely to be lots of activity on or near water. Frog and toad spawn will have hatched so plenty of tadpoles around and look out for large dragonfly nymphs too which enjoy eating a tadpole or two.  On the Mimram, stonefly larva and caddis fly larvae were seen in March, and mayfly larvae, which will of course be more active in May.

If you spot anything interesting, or would like to contribute your knowledge to these monthly nature updates, please let me know by emailing info@outdoorlearningexperiences.org

Compiled by Frances,  with supporting material from Sarah Kohl and Julie Wise.