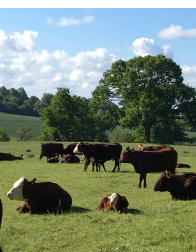 By June we are definitely in summer, with the days at their longest as we approach the summer solstice. This is a time of rapid growth, for crops and pasture on agricultural land, and for natural vegetation.

If you are interested in wild flowers, there are many to look out for in this area in June. I’m writing from Hertfordshire, where you could visit St Paul’s Walden churchyard to see the prettiest meadow with Common spotted Orchid, Lady’s Bedstraw, Lesser Stitchwort, Oxeye Daisy, Meadow Buttercup and many more plants in flower. Walk to Hitch Spring for Common Spotted Orchid, Angelica, Pignut and Common Sorrel in flower.

Scarlet Pimpernel was once a common arable weed and is now seen in gardens and on roadside verges. It only opens when the sun shines and is known as the poor man’s weather glass as the flowers close when the atmospheric pressure drops and bad weather approaches.  Look out for the pretty grass Crested Dogstail which is a tight rather stiff-looking grass with narrow, green leaves in flower now. It has short, upright flower spikes with a tightly packed cluster of spikelets (containing the flowers) arranged in a long, rectangular shape. Apparently, it was grown as a crop and used to make bonnets. Yellow Rattle is in flower and is semi- parasitic feeding off the nutrients in grass roots. For this reason, it was once seen as an indicator of poor grassland by farmers, but is now often used to turn improved grassland back to meadow – by feeding off the vigorous grasses, it eventually allows more delicate, traditional species to push their way through. Look out for Wild Hop growing in the hedgerows. Elder flowers are great for making Elderflower cordial but leave some blossom to produce berries for hungry birds in the autumn.

June is a great month for moths, with some of our largest and most impressive species now ‘on the wing’, so why not try nature-spotting at dusk? Especially local is the Elephant Hawk Moth which feed on Rosebay Willowherb, a tall pink flowering plant of disturbed ground such as verges, woodland clearings and waste ground.

Bats are on the wing at dusk, locally Pipistrelle, Long Eared Bats and Barbastelles. You may also be fortunate enough to see fallow deer, or muntjac, with their young.

If you are still feeding the birds, look out for parents bringing their fledglings to the feeders, birds such as Great Spotted Woodpeckers, Robins, Goldfinches, Blue Tits and Dunnocks will take advantage of the free food. Ducks and ducklings, Geese and Goslings, are on local ponds.

Many of the cows at East Hall Farm have calved, and the herd is moving around the fields on the mob grazing system. Mick Hickman, the stockman, has been posting pictures of the calves on the Whitwell facebook page, and also updating people with the movements of the herd around the fields.

In a normal year, Open Farm Sunday takes place in the first half of June, providing an opportunity for people to visit farms, and learn about food production. This year the event has been postponed to September 20th. In the interim, an online Farm Sunday is taking place on 7th June, which you can follow by searching #LOFS20.